Okay, so hiiiii everyone, if anyone is reading..
If not, then just hi to cyberspace..
Umm I know I have been gone for a loooong time.
Buuuut I just love blogging at random times, and I know that right now it will do me some good..

To catch everyone up, my cross country season was Craaaap with a capital C.
Why? Several reasons probably.. the most important being that I felt burnt out from running.. I didn't enjoy it anymore, and I began to associate it with my ED. I wanted so bad to leave that world (ED) of unhappiness, loneliness, selfishness, worthlessness, etc..

Not until recently did I decide to get my head out of my butt and start over with running.
I acquired a new attitude, and I was so excited to battle for the rest of the year just like I did last year. However, soon afterwards, I found that my calf was hurting so badly that I began to limp when running..

I got an MRI the week after SEC's, and the doctor read it as clear.. So many people were telling me that it was just shin splints (including the doctor).. And that has been really frustrating because it hurts so badly, not like shin splints..
So the past couple weeks have been rough.

I've been cross training, (bike, pool, elliptical, etc..) and nothing hurts other than walking and running.
Most of the time I can't even walk without a gimp..

So I obviously did not run Regionals last weekend.. and I'm glad I didn't because I don't think I would have been very much help at all, and I probably would have hurt myself even worse..
I went to see Katie (trainer) when we got back this week, and she suggested that I see another doctor.. So yesterday I went to see another doctor, and this doctor actually seemed interested in my leg! He touched it, asked me questions, and said that it sounded to him like a gastrocnemius muscle tear..
He checked the MRI that the previous doctor had read as clear, and we all could easily see the tear in my leg that the previous doctor had missed..

I left the doctor smiling this time.
Of course I am not happy to be injured, but this is great news that it is not a stress fracture, and at least now I know what it is.
The doctor says that I will be back running by December 15th, and I am MORE than happy.
I seriously did not realize how much I would miss it. Sure, a couple days off is cool sometimes, but by the time I start running again I will have been off for at least 6.5 weeks.. So I know if I am itching to run now that I definitely will be by then.

Anyway, other than that.. things have been really different..
Sometimes I am way up, and sometimes I am way down.. I am dealing with a lot of family stuff right now, and I didn't realize until recently just how much of an effect all of that has on me..

But anyway, I am finding out who I am, and I am learning to love myself.
The only thing that I hate is my hold on my eating disorder.. sometimes I still find myself having very anorexic thoughts and I'll think that maybe today I can just eat 1000 calories and work out for an hour and half and lose half a pound..
Other days I go on the other end and just want to eat everything in sight, and I think it's because I want so badly to get away from my anorexia... there's something in me that calls for food, even if I'm not hungry.. it's like a void in my life that I fill with anything and everything I can get my hands on..

So yea, there's too much to mention everything in my life in this one blog post, but I want everyone to know that even though this blog is pretty negative, I am soooo much happier now than ever, and I have made some of the best friends this year, Jodie and Mollie. *No pics of Mollie cuz she hates the camera, ha. Also, I live in a wonderful house with wonderful roommates (4 other girls, eek! ha) ;) And Connor and I now have the best puppy in the whole world. Oh, and as always, I love Connor ;)

I'll write more often cuz there's just TOO much to say now.
Lovelovelove everyone that reads this.
Oh, and I am really growing in my relationship with Christ. It's super awesome. Just sayin'
<3 Haley
Posted by Haley at 10:11 PM 13 comments: Links to this post 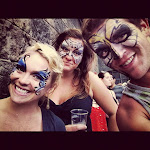